Nashville has a mental health problem. So, what do we do about it?

Nashville residents appear to have worse mental health than the rest of Tennessee or peer cities in other states, raising concerns about whether enough is being done to treat stress and depression in the city, according to a landmark health survey.

More than one-fifth of Davidson County residents have been diagnosed with a depressive disorder at some point, the survey said, and residents reported an average of 5.3 “poor mental health days” per month.

All of these results come from the Nashville Community Health + Well-being Survey, which was conducted in 2019 in a joint effort by city officials and the nonprofit NashvilleHealth, led by former U.S. Sen. Bill Frist. With more than 1,800 respondents, the survey offers the most detailed health data about Nashville in nearly two decades.

The study examined a variety of topics from obesity to insurance coverage, but some of the most significant findings dealt with mental health. In addition to 5.3 poor mental health days reported by residents overall, more days were reported by women (6.2), the unemployed (7), gay or bisexual people (10.2), and those without a high school education (10.5).

Nashville caught between the North and South

Although the NashvilleHealth survey is the first to quantify the city’s struggle with mental health, it does not answer a key question — why?

At least one expert has a theory. Paul Gionfriddo, president of the nonprofit Mental Health America, who visited Nashville in December for a panel discussion on the survey results, said he believed the high rates of depression and stress may stem from the city’s role as a “gateway” between the North and the South.

Historically, Northern states have suffered high rates of depression — caused in part by long, cold winters — but have also offered more opportunities for treatment, Gionfriddo said. In contrast, Southern states report fewer mental health issues but also scarcer resources for those who need help, he said. Nashville is “caught in the middle.”

“Nashville has really become a gateway from the North to the South and vice versa,” Gionfriddo said. “Nashville is beginning to experience some of the problems of the North but without yet having the solutions that have been devised over generations up North.” 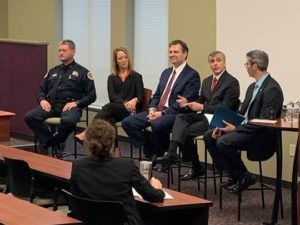 Fortunately, the city’s options for mental health care are growing.

The Davidson County Sheriff’s Office is set to open a similar facility in July. Agency spokeswoman Karla West said the 60-bed Behavioral Care Center will house people who are arrested but need a therapeutic environment instead of jail.

Additionally, Saint Thomas Health is building a behavioral health hospital in MetroCenter slated to open this year. When the hospital was announced in 2018, Saint Thomas executives said it was needed to bridge a gap in the city’s safety net.

“We need to get beyond the stigma around behavioral health,” James said during a recent NashvilleHealth meeting. “For some reason, we have a lot of shame about it in the South — I’m a Southern, so I can say that — and I think we need to address this just like all other medical conditions. We need to make sure it gets the same attention.”

Gionfriddo also stressed Nashville’s mental health problem may not be as unique as it first appears. Few cities have performed studies as detailed as the NashvilleHealth survey, he said, so it is likely many other cities have similar struggles with depression and stress that remain unreported.

“That would be my expectation,” Gionfriddo said. “If other communities are willing to self-reflect in this way, Nashville may not look so different from a lot of them.”