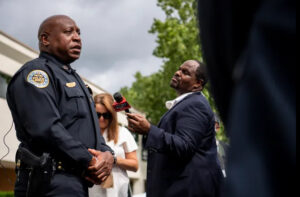 The city already has a mobile crisis team but is adding a new approach in which police officers and mental health professionals respond simultaneously to 911 emergencies involving people with mental health issues.

The initiative takes place over the next 12 months and comes in the wake of a handful of Nashville police shootings this year involving people suffering from mental health crises.

“I’m totally committed. I’m totally excited you volunteered to be a part of this,” Nashville police Chief John Drake told the test team inside a Mental Health Cooperative classroom in Metro Center. “Whatever resources we need to put into it, we will.”

The pilot involves reality-based training and scenario acting and was developed on the MNPD side by alternative policing office Inspector David Imhof.

“When calls for service come in, they will arrive together,” Imhof said. “Officers will stabilize the scene, and mental health experts will assess. The goal is to make sure people get all the help they need, avoid jail, limit the number of people who go to the hospital, and avoid future incidents.”

The team will receive 40 hours of training from mental health professionals, Amanda Bracht, the senior vice president of clinical services at the health agency, said. 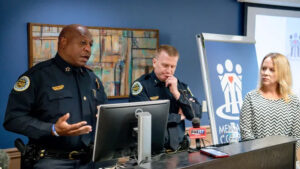 “In the academy with those hours, the primary goal is for a person starting at zero knowledge of mental illness and bringing them to be familiar with the different types of mental illness, kind of like a basic 101 class you would have in college,” said North Precinct Officer Mary Hall, who volunteered to be trained. “You’re not majoring in psychology or biology but you’re going to take classes to introduce you to what’s going on.”

Officers currently are limited in how much help they can provide, she said.

“I’m not a professional and I don’t have that person with me to provide what they need,” the 24-year-old, two-year MNPD veteran said. “We just leave depending on the situation.”

“Being educated a little bit more about how to talk to them and be with them through this and give them services, as well as have someone else who completely dedicates their job to it, we’re able to give more time, effort and energy in providing them with a service that will hopefully not only take care of the situation at hand but prevent them from calling again,” Hall said on day four of the week-long training. 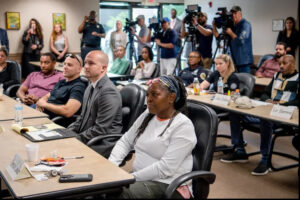 The pilot program team will work the North and Hermitage precincts, for now, Imhof said. But, he said, they could get called into other precincts to help until officers there are trained.

Although the group is starting with six clinicians, that number will likely grow.

The police department, Imhof said, is working in conjunction with Nashville Mayor John Cooper’s office, the Metro Public Health Department, the Nashville Fire Department, and more on the pilot.

“It’s been a true collaboration,” he said. “It’s a community program. The pilot program is to find out what works and what doesn’t. Every situation will be unique … a lot of times these calls are unpredictable.” 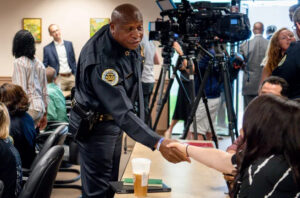 MNPD is basing its team on Denver’s model.

On Friday, MNPD Office of Alternate Policing Strategies Capt. Terrance Graves said the department hopes the next group of about 50 officers will be in the classroom before September.

Meanwhile, he said, MNPD will assess which precincts will enter the next training.

“Ultimately we want to train all of the patrol,” Graves said.

The team, ranging from officers who’d been on the job for just a few years to long-time department veterans, worked on active listening skills via conversations focusing on people with suicidal thoughts, domestic violence victims, and others in crisis. 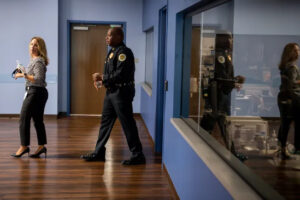 Police took turns role-playing both officer and person in need with the six mental health pros.

“I’m embarrassed that you had to come out here,” a counselor said during one exercise.

“I understand you are embarrassed but you called us and we had to come out here and we are here to help. Just tell me what happened today,” an officer playing a person in need responded, his voice soft and soothing.

Randolph said it is crucial for officers not to zone out during interactions with those in crisis.

“People don’t feel engaged. They feel hurt. Respond with, ‘I can hear the anger in your voice and it seems like this situation has hurt you also.’ A person is going to hear it and feel heard. That is what we want for de-escalation.”