More than a dozen Nashville police officers will begin piloting a new crisis intervention program at the end of the month.

The 16 trained officers are volunteers from the Metro Nashville Police Department’s Hermitage and North precincts. They’ll be riding with behavioral clinicians as they are dispatched to crisis calls. 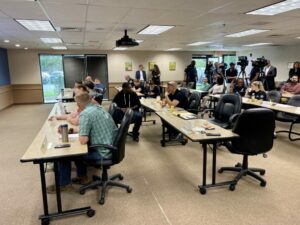 There will be a total of six clinicians from the Mental Health Cooperative across the two precincts. The clinicians will be assigned to make first face-to-face contact with residents when dispatched. They’ll also conduct follow-up calls to gauge additional behavioral health needs.

Imhof says the pilot program will be defined over the next 12 months. One goal, he says, is to put people in crisis under the care of the public health system, as opposed to jails.

“We will get calls for service from the community as well as from 9-1-1 … the co-response is going to have a clinician embedded in these precincts,” says Imhof.

The new program is launching after some have called to defund the Nashville police department, which has gained little traction in local government.

In March, Nashville police received criticism for a shooting that injured a woman after a mental health call. During a separate incident in May, police fatally shot a man after receiving a call from his mother.

“I would love to see that we see arrests for minor misdemeanor offenses related to people who mentally ill possibly go down,” says Amanda Bracht, the senior vice president of clinical services at the Mental Health Cooperative. “Those are some of the measures that other cities have looked at, [and] uses of force.”