Mental health professionals riding along with police are “making a difference”

NASHVILLE, TN (WSMV) – The shooting that occurred at the Smile Direct Club in Antioch on Tuesday is the kind of thing Metro Police are hoping to prevent with its “Partners in Care” pilot program. 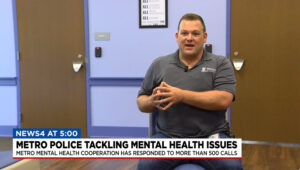 The now month-old pilot program is among the first of its kind in which trained mental health professionals ride along with police and help them respond to calls.

The program’s focus? To help the mentally ill get the care they need instead of landing in a cell only to repeat the process.

Police told News4 the new teams have responded to more than 500 calls and the ride-along mental health professionals have performed more than 100 evaluations.

Of the 37 cases where police could have legally made an arrest, they only ended up charging 7 of those people as a result of the program. The other 30 were connected to mental health resources.

MNPD says having trained mental health workers in the car has paid off.