‘We are finding people who are in crisis’: Mental health workers joined police on over 500 calls’

Mental health workers joined Nashville police officers in a three-month span on over 500 calls, with 41% triggering a crisis assessment and only 4% leading to arrests.

The long-awaited Partners in Care program launched as a pilot June 28 and released its first quarter data earlier this month. The initiative pairs mental health clinicians with Metro Nashville Police Department officers with the goal of mental health crisis intervention. 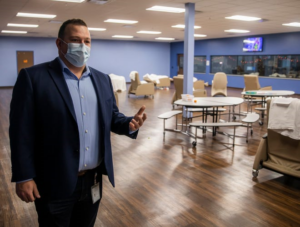 The program came on the heels of three shootings in as many months involving Nashville police and people in a mental health crisis.

The pilot program logged 542 joint response calls from June 28 to Sept. 28, according to the report, far surpassing what leaders anticipated.

“It’s been very fast-paced,” said Michael Randolph, who helps coordinate the program’s daily operations and oversees the team of clinicians. He also goes on calls two days per week.

Randolph said he and his team, who are part of the Mental Health Cooperative, have been amazed at how great the need was for their services. He said they have helped with everything from suicide intervention to people experiencing a psychotic break to de-escalating tense situations. 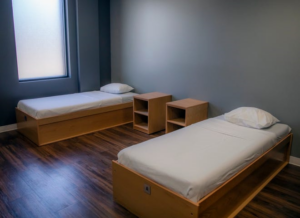 Roughly half of the 542 calls rose to the level of an acute mental health crisis, according to Randolph.

Randolph’s team works out of the cooperative’s Crisis Response Center, which is tucked by the Cumberland River north of downtown. The facility operates 24-7 and is free to anyone experiencing a mental health crisis and even offers beds to those awaiting placement in a psychiatric hospital or other facility. The mobile crisis team is also stationed at the response center.

Nashville modeled the initiative after a promising new program in Denver. Based on the first quarter numbers, Randolph said Nashville is on track to match Denver’s pace, even though the program is only running in two of the city’s eight precincts.

“I think we are finding people who are in crisis, people who need help, who were not getting served before,” Randolph said.

How the data breaks down

The pilot covers the city’s North and Hermitage precincts and will continue through June 2022. The remaining six precincts have access to the city’s mobile crisis team. 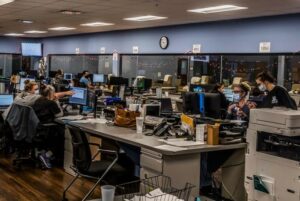 The mobile crisis team is deployed when officers, callers or emergency dispatchers believe mental health support is needed. Those in crisis can call 615-726-0125 for direct access to the team.

The pilot, however, has mental health workers already in the car with officers, covering two shifts from 7:30 a.m. to 11 p.m. daily. The PIC teams respond specifically to calls that may involve a mental health crisis in the North and Hermitage precincts.

So far, around 58% of the joint response calls in the Partners in Care program were in the Hermitage Precinct and 42% were in the North Precinct.

“Once called to the scene, MNPD officers stabilize the situation so that clinicians from the Mental Health Cooperative can assess the individuals and connect them to the behavioral health care they need,” a news release from Nashville Mayor Cooper’s office stated.

The program is a joint effort between MNPD, the Metro Public Health Department and the Mental Health Cooperative. It also coordinates with multiple city agencies and local partners, like hospitals and addiction and mental health centers. Officers who volunteer to team up with mental health workers undergo 40 hours of special crisis training through the Mental Health Cooperative 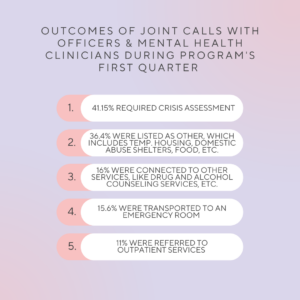 Here are the outcomes of the joint calls with officers and mental health clinicians in the program’s first quarter:

Here’s a snapshot of the demographics of the joint calls: 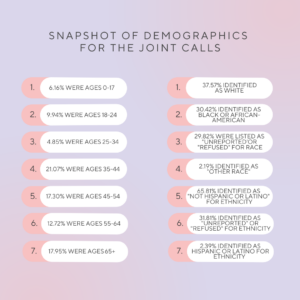 The report noted that all data are provisional and subject to change.

Source: The Tennessean
Back