Police Co-Response Program Eyes Expansion — but Is It Too Little Too Late?

When Landon Eastep was killed by law enforcement officers on Jan. 27, it sparked outcry. Many community members said they simply want to see someone with a history of mental health struggles like Eastep helped, not hurt. 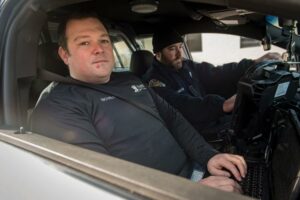 A week after the shooting, on Feb. 3, the Metro Nashville Police Department and Mental Health Cooperative released statistics on the first six months of its pilot program, Partners in Care, which pairs a police officer and a mental health clinician to respond to calls together. According to the report, of the 821 calls handled by the team in two pilot precincts — Hermitage and North — only 3.7 percent were taken to jail, while 21 percent were taken to the emergency room, and 6.5 percent were taken to crisis treatment. The most common outcomes were “support and rapport building” and referral to community resources, at 25 and 22 percent respectively. The program received $561,816 from federal funds for pandemic response.

Partners in Care is small, with just four full-time clinicians. In addition to those four staffers, Michael Randolph fills in while heading up the program on the Mental Health Coop side, and another clinician fills in as needed and does all the follow-up calls. Partners in Care is active Monday through Friday from around 6:30 a.m. until around 11 p.m.

On Feb. 4, Mayor John Cooper’s office announced that it’s applying for a federal technical assistance grant, which would get the ball rolling toward a program that doesn’t involve police at all — it would instead see a medic and a mental health clinician responding to crises. The approach is modeled after Denver programming, which started with co-response efforts in 2016, and continued with a non-police response group called Support Team Assisted Response that debuted in June 2020.

With calls answered by the Partners in Care team, the police officer will secure the premises first. The clinician waits in the car, but the officer may let the person they’re responding to know that a clinician is there. When given the OK, the clinician steps in to introduce themselves.

“We want that person that we are seeing in crisis to be a partner in deciding what they need,” says Randolph. “And we want to do a least restrictive alternative.”

Partners in Care are also responding to calls that may not reach the acuity level of mobile crisis calls, a program by the Mental Health Coop that can be summoned to the scene of a mental health crisis. Randolph estimates that around 40 percent of the pilot program’s calls were crisis calls — for situations like psychosis or threat of suicide — and 60 percent were more general mental-health-related calls.

From the dispatch side of things, Nashville’s Department of Emergency Communications codes eight different types of calls in its computer-assisted dispatching center to look for Partners in Care first, if they’re available. But for now, if you call 911, you’re most likely going to have a police officer on your doorstep — DEC director Stephen Martini says it’s a liability to send only mobile crisis when someone dials 911.

Denver takes requests for its non-police response program both through 911 and through a separate non-emergency number, but advocacy group Nashville Community Crisis Response would like to see Nashville’s program housed completely separately from the police department. The mayor’s office has not yet said where the non-police alternative would be housed.

“We want to train people in the community to be able to recognize and handle mental health crises in their families, with their neighbors,” says Theeda Murphy, a member of Nashville Community Crisis Response who has experience working in mobile crisis counseling outside of Davidson County. “And then we also want them to have a place to go where they can ask for help and do what mobile crisis is supposed to do, which is to provide the clinician who comes on site and does the intervention without police involvement, unless the clinician decides after they have assessed the situation that the police need to be involved.”

MNPD Cmdr. David Imhof says the department is eyeing Central Precinct for expansion of the Partners in Care program and will be announcing plans in the coming weeks, well before the pilot’s first year is up. The expanded program will require the same 40-hour crisis intervention training that Partners in Care officers underwent for all of the direct service officers — a task that will take three years at eight trainings per year.

“Having many people trained to at least triage those situations, to de-escalate those situations, to understand and recognize signs of behavioral health crisis and be able to make the appropriate phone calls to mobile crisis if the team’s not available,” says Imhof, “I think it’s gonna be extremely beneficial to the department long term.”

MNPD is still very much a part of this co-response model, and it will be some time before options outside of law enforcement become more available in Nashville. The debate remains on what is the right response when a weapon is involved in a mental health crisis. Eastep — who was holding a box cutter when he was shot to death by several law enforcement officers — wasn’t the first to be denied the opportunity for treatment.

“The first responders who respond to those calls where weapons are involved, they do get special training,” Randolph says. “They do have a clinician on scene to consult with. When it is safe for that clinician to talk to that person, they will talk to that person and get plenty of help. And we’re giving those first responders, and especially that person in crisis, all the tools we can to safely resolve that crisis moment and get them into treatment.”