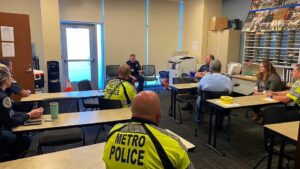 Nashville’s Central Precinct is the third and latest to join a crisis response program that pairs mental health workers with police.

The precinct, which includes downtown, was added to the program Monday, the Metro Nashville Police Department said in a news release. So far, one mental health clinician has been added as a co-responder in the Central Precinct. A second is set to join in June, MNPD said.

The program teams masters-level mental health clinicians with officers on calls flagged as potential mental health crises. The program aims to divert people in crisis to intervention and offer them resources rather than the legal system.

The program launched last summer in the North and Hermitage precincts and is nearing the end of its pilot year. Program leaders presented the latest data earlier this month and said they logged a total of 1,055 calls as of March 28. An average of 4% of those calls resulted in arrests in the program’s first three quarters, data showed.

City leaders, including Nashville Mayor John Cooper, have said they plan to expand the program in the future. A total of 70 MNPD officers have completed 40 hours of crisis training to support precincts that do not have the co-response model — a move meant to support the program’s future growth, MNPD said. A mobile crisis team is also available to all precincts.

Leaders also said the city’s South Precinct is expected to join by the end of the year.

The program is supported by over $560,000 in federal funds through the American Rescue Plan, a news release from the mayor’s office said. Cooper included plans to double the program in his latest budget proposal, in coordination with the Mental Health Cooperative.